Areyvut is excited to announce that Jay Feinberg, founder and Chief Executive Officer of Gift of Life will be receiving the Community Leadership Award at our Annual Breakfast on Sunday, May 15.  We are excited to honor and recognize Jay for his service and leadership.  To make a donation in honor of Jay, reservation to join us and be inspired at the breakfast or for more information, please visit http://bit.ly/1TjAArk, call 201-244-6702 or e-mail social@areyvut.org. 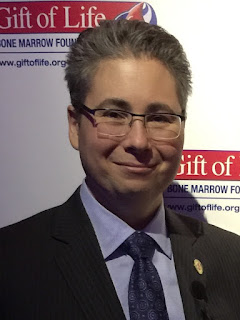 A 20 year transplant survivor, Jay Feinberg is Gift of Life’s founder and Chief Executive Officer. He was diagnosed with leukemia in 1991 and told that his only hope of a cure was a bone marrow transplant. With his family and friends in tow, Jay embarked on a groundbreaking international search for a matching donor. After organizing 250 drives and testing 60,000 potential donors, Jay’s match turned out to be the very last donor tested at the very last drive. He received his transplant at the Fred Hutchinson Cancer Research Center in Seattle, Washington in July 1995 thanks to his bone marrow donor, Becky Faibisoff.

Jay formerly served on the Board of Directors of the

World Marrow Donor Association (WMDA) in the capacity of Secretary of North and South America. For years, he volunteered his time as an inspector for the WMDA’s Accreditation Committee. Also, Jay is on the Editorial Board of Bone Marrow Donors Worldwide.

Jay received his Bachelor of Arts in Political Science from Dickinson College in Carlisle, Pennsylvania, where he graduated Phi Beta Kappa. He has received numerous awards, including the prestigious

Charles Bronfman Prize. Other notable honors include the National Marrow Donor Program‘s Allison Atlas Award and Hadassah International’s Citizen of the World Award. Jay is the recipient of an honorary doctorate degree (Doctor of Humane Letters, honoris causa) from Yeshiva University in New York. This is the same university that conferred an honorary degree on Sen. Hillary Clinton. Most recently, Jay received the Jewish Community Hero Award from the Jewish Federations of North America, a leadership award honoring those making strides to repair the world, starting in their own communities. In 2013, Jay was recognized in the Algemeiner Jewish 100 List—the top one hundred individuals who have positively influenced and lifted the quality of Jewish life over the past year.
Also in 2013, Jay was the recipient of the Maurice N. Eisendrath Bearer of Light Award from the Union for Reform Judaism (URJ). This award is the highest honor bestowed by the Reform Movement. Every two years at the URJ’s Biennial, the Award is conferred for service to the world community and Reform Jewry. “It is people like Jay Feinberg who truly make our world a better place,” said URJ President Rabbi Rick Jacobs. “Jay’s tireless work has saved countless lives, and his actions follow in the footsteps of Reform social justice pioneers, such as Rabbi Eisendrath. The Talmud teaches that whoever saves a life, it is as if he has saved the entire world. Jay’s work so truly embodies this teaching, and for that, we are abundantly grateful.” Visit: http://youtu.be/x-aYmEyWRkg to watch the video.
In 2011, Jay was one of three non-profit leaders in South Florida to be awarded a scholarship to the Harvard Business School‘s executive education program “Strategic Perspectives in Non-Profit Management”—the flagship of the HBS Social Enterprise Program designed for top executives in the non-profit sector.
Jay has brought tremendous innovation to Gift of Life, including the use of cheek swabs for bloodless testing at donor drives, complete typing at initial recruitment, and most recently, Speed Swabbing® technology. He is responsible for establishing groundbreaking relationships with organizations such as Hillel: The Foundation for Jewish Campus Life, Taglit Birthright Israel, KEDMA, AEPi, and more. He has also been responsible for negotiating partnerships with other registries, most notably the National Marrow Donor Program. His vision and subject matter expertise guides the strategic direction of the organization in conjunction with the Board of Directors.
Jay has been an invited guest at the White House during the past two presidential administrations.