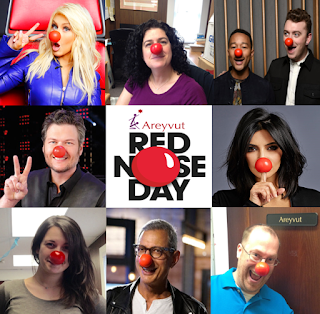 Over the past few months, you may have seen some of your favorite celebrities clowning around, NBC buzzing about a special telethon or your local Walgreens selling shiny red noses. All of this hype was centered around Red Nose Day, a campaign dedicated to raising money for children and young people living in poverty by simply having fun and making people laugh. On Thursday, May 21st, people around the country did just that by throwing on a red nose, raising awareness and tuning into NBC’s comedy telethon to help raise funds for children in need.
Red Nose Day’s Telethon raised 21 million dollars, attracted 688,000 viewers and generated 387,000 Twitter mentions. 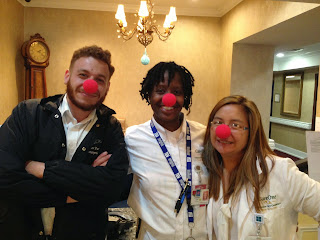 One of Areyvut’s flagship programs is Mitzvah Clowning, so it only natural for us to grab our clown makeup and balloons and get in on the action! To celebrate Red Nose Day, Areyvut facilitated three Mitzvah Clowning visits, spoke to 500 students at Yeshivat Noam about the importance of kindness and charity and distributed 3,000 clown noses to raise awareness of Red Nose Day.
As we spoke to students, teachers and community members alike, it was clear how powerful the message of Red Nose Day was. The excitement was palpable and it was amazing to see how happy people were just by simply receiving a fluffy red nose.

We’re excited by how much buzz this day has stirred and we’re eager to see how we can make this event even bigger and better next year! If you have any ideas and would like to participate in next year’s Red Nose Day, please email social@areyvut.org

Check out this video to see highlights from our Red Nose Day!