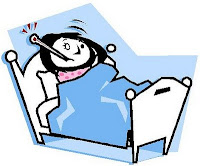 I am well aware that several weeks ago I had committed to blogging once a week, more specifically, every Monday. Clearly, that has not happened. In fact, just now as I was sitting in front of my computer, Daniel was in a state of disbelief when he innocently passed by and asked, “You’re blogging?”. Indeed, I am blogging, but having not blogged for such an extended period of time, it’s hard for me to figure out what I want to say…so I figured, I’d report on my day.

I returned to work today after being out with the flu for a week. (Note to self: Next year get the flu shot.) I started the day with over 103 emails in my inbox. Most of them I had already read through by the time I came into the office, but everything either still had to be dealt with, or at the very least deleted (I don’t like a crowded inbox).
A lot of my day was spent on Disney’s “Give a Day. Get a Disney Day.” Promotion. We have a number of projects that we’ve put together which is exciting and time consuming all at the same time. We’re juggling about 60 people with 7 different projects, the first one of course taking place tomorrow. Though we know it will be successful, it’s still something that has to be addressed today.
I moved on from Disney to our e-Newsletter. Believe it or not, today is Feb. 1 which means that our e-Newsletter should be coming out at some point this week. Well, at 10:30am I was staring at a blank template, but somewhere around 12:00pm all of the information was in there…it’s not spellchecked yet, but at least the information is there.
From the e-Newsletter I moved to learning about iPods. Weird, I know. But, we still owed one gift, to our Grand Prize Winner no less for the Areyvut Bnai Mitzvah Video Essay Contest. I learned about the different models and then let him know which one he is eligible for…I have a feeling he’s going to go for the Gift Card option anyway.
I sent a ton of emails today. Most of them included some line about how sorry I was that I had the flu last week and couldn’t get back to the individual in a more timely fashion. It felt weird to apologize for acquiring an illness I didn’t want in the first place, but still, I thought it was the right thing to do.
Now, as my day is nearly ending, I’ll hit the spellcheck button, add some links, post and check my email…I heard the dinger go off so I know I have at least one email waiting for me in my now, more manageable inbox. Until next week…or maybe a little after that.